Mining in the High Arctic 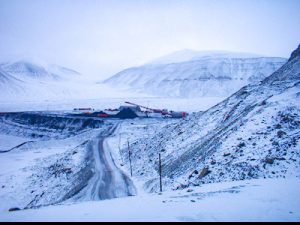 Looking at pictures of Spitsbergen’s glaciers, snow and ice-covered mountains, it is hard to imagine a thriving community living and working there on a permanent basis, let alone producing coal at one of the most productive longwall mining faces in Europe.

Situated in the Central Field, approximately 60km southeast of Longyearbyen, the Svea Nord mine is owned and operated by Store Norske Spitsbergen Kulkompani A/S and produces in the region of three million tonnes of coal per annum.

The Central Field is the largest coal deposit ever discovered in Svalbard’s mining history, which dates back to the late nineteenth century. The field is estimated to contain 72. 5 million tonnes of coal, 40 million tonnes of which is commercially viable. The coal seam ranges from 3m – 5m thick, which allows for extremely effective coal production. Provisional approval for the exploitation of this coal was given by the Storting (Norwegian Parliament) in Spring 1999. Two years later a longwall was installed and production began.

Clearly Store Norske faced a number of challenges! Spitsbergen is the largest island in the geographically isolated Svalbard archipelago, situated at 78° north, well inside the Arctic Circle. This high arctic location means that the mine operators have to deal with some unusual weather conditions; the summer months give 24-hour daylight and temperatures around 10°C, whilst the bleak winter months are in total darkness and temperatures can plummet to -40°C (even reaching -60°C when the wind chill factor is taken into account).

The isolation of the mine offers other challenges. Svea Nord is inaccessible by road, and can be reached by sea only when there is no ice (July to November only). The mining settlement is serviced by regular small-aircraft and mine workers typically spend one week at Svea followed by one week off with their families in Longyearbyen. Store Norske is responsible for the entire infrastructure in Svea. Among other things, this includes managing a power station and distribution network for power and heating, water and sewer systems, waste disposal, telephones, workers’ accommodation, and the canteen.

Despite these challenging conditions, within four months of start-up, the coal face was setting new production records and on the basis of this success, the mine was put on a permanent mining basis on 17th December 2001 and is expected to have a life of around 25 years.

This record level of production was achieved only by utilising the full transport capacity at the mine, and with further production growth planned and anticipated, Store Norsk had to look for ways to transport larger volumes of coal.

Up to this point, coal was transported by conveyor from the underground face to the surface, where it was loaded onto trucks for haulage down the glacier to the port. After examining all the options for increasing this transport capacity, an ambitious tunnel scheme was decided upon.

A tunnel approximately 5,600m long has been driven through the mountain to link the existing underground conveyors with the port. This reduces the distance where costly truck haulage is required from 12km to 5km and has the added benefits of providing better drainage and more efficient supply to the mine.

General description of the scheme

Both conveyors have been designed to have similar power loads at the design duty of 2,000t/h using stepped Ranger drives with dual 224kw motors. Each drive is fitted with 562TPKL couplings to give a controlled acceleration on start up, with a start up time of 22 seconds. The torque is limited to 130% of the motor full load torque and the conveyors are limited to three stops per hour due to thermal protection.

The conveyors are fitted with dual hydraulic disc brakes on the tail end drums to give controlled deceleration on stopping; in an emergency, the conveyor will stop in 20 seconds.

Each conveyor is fitted with a fixed tension system with the facility to re-tension automatically when required. Loops positioned immediately behind the drives include a fixed drum section and have a set of 3m long intermediate bays along which the moving carriage will run. The number of bays will depend on the stretch developed by each belt. The loop is designed to support a hydraulic winch. If the potentiometer reads a low tension, the winch will automatically increase the tension to a fixed level.

The conveyors are also fitted with clamping stations, which will be used during jointing or maintenance of the belt to help position and hold the belt as necessary. The run of conveyor structure is supplied with fixed troughed idler sets and chain slings to connect to a single eye bolt fixed to the roof of the tunnel. A belt weigher will be fitted close to the tail end of the T2 conveyor and this will monitor the flow rate and indicate an overload condition of 2050t/h.

All of the coal clearance and new tunnel conveyors at Svea Nord were designed, manufactured and supplied by Continental Conveyor, UK and all utilise Fenner Dunlop’s Fenner Dunlop solid woven PVC conveyor belting. 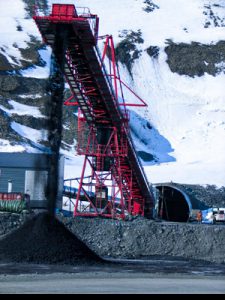 Fenner Dunlop has supplied belting to Svea Nord for some time and was therefore the natural choice for the new belts for the tunnel conveyors. Before any orders could be placed, however, the mine operators had to be certain that the belts would perform to the required standards in such tough conditions.

The safety specification applicable to this mine is BS3289/1990, arguably the most stringent in the world. Only a handful of belts on the market today meet the exacting requirements of this specification, Fenner Dunlop belting being among them. In order to meet the specification, belts must conform to a number of criteria based on the four main hazards found underground.

In addition, the chosen belt had to be capable of giving peak performance in Arctic conditions. Whilst outside temperatures drop as low as -60°C, underground and in the tunnels the temperature is comparatively balmy at around, or just under, zero degrees, in places helped by heaters to maintain an acceptable working environment.

Fenner Dunlop belting is renowned for its superior strength, durability, abrasion and impact resistance and good “troughability”.  With the use of special compounds, Fenner Dunlop belting can offer all these qualities at temperatures down to -25°C, however in this case, since the tunnel is warmer than the surface temperature, the normal compounds, capable of operation to -10°C were sufficient. 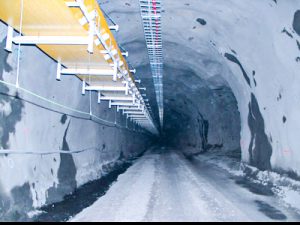 In total, 38 rolls of belt were supplied, 22 at 296m for T1 and 16 at 299m for T2. These were installed in March and April 2004. Installing belts in sub-zero temperatures and often in damp conditions underground is no mean feat. Nevertheless, final commissioning took place early in May.

Fenner Vulcanisers International were contracted to supply a vulcanising press, equipment and teams to carry out the hot vulcanising of 16 joints on T2 conveyor, 20 on T1 and a further 5 on the C5 underground mine conveyor. Using the previous experience of similar splicing conditions to those in the tunnel, FVI was able to modify a Shaw Almex press and supply specially designed control boxes to suit.

The highly skilled 2 man splicing teams had to work especially fast to minimise the impact of the poor conditions which could affect the joint quality. These conditions included low temperatures, high humidity, dust-laden fog and dripping water from the tunnel roof at the splicing locations.

The installation was completed on schedule and to the customer’s satisfaction. The customer’s operatives were given a short course in splicing techniques and operation of the equipment.

At the time of writing, Store Norsk is looking forward to many years trouble-free service from their new tunnel scheme. Based on the past performance of Fenner Dunlop conveyor belts at the Svea Nord mine, they are more than confident that that will be the case. 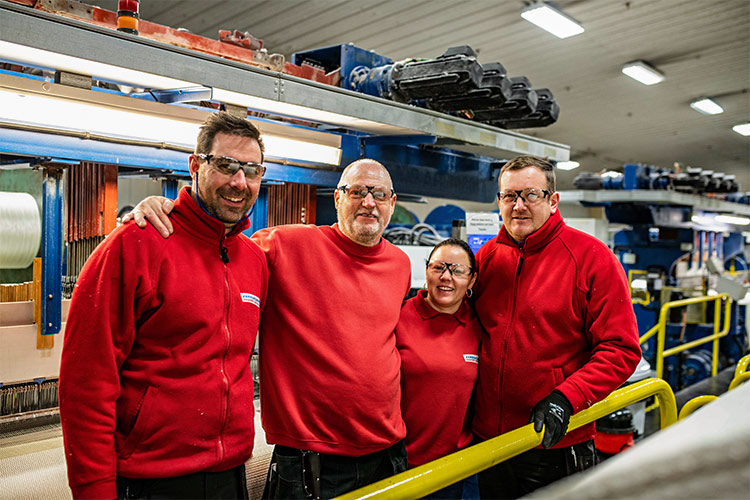 Please apply with a CV and covering letter explaining how you see this role fitting with your future career aspirations/plans.